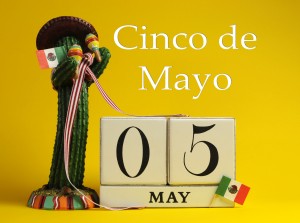 While there is a long tradition of celebrating this day in both countries, the festival takes on a different meaning in its native Mexico. Here are some tidbits about Cinco de Mayo which are rarely known outside of Mexico.

It started as a victory celebration for the Mexican Army

These days, Cinco de Mayo has come to be associated with Mexican-themed fun and games. For some, it is a day to assert their Mexican pride and to reaffirm their Mexican heritage. Few remember that Cinco de Mayo originally started out as a celebration of the Mexican Army’s victory over French forces on the 5th of May. The French army was much better equipped, but the Mexicans persevered in the Battle of Puebla, eventually defeating the larger French army. While this was by no means the definitive battle that drove out the occupying French forces, it provided a massive morale boost to the Mexican forces, spurring them to victory eventually.

Cinco de Mayo is not a federal holiday in Mexico

One would expect Cinco de Mayo to be a federal holiday in Mexico, the country it is strongly associated with. However, in most of Mexico, life goes on as per normal even for Cinco de Mayo. The sole exception to this is the city of Puebla, where the fateful battle against the French occurred. In Puebla City, public schools are closed on the 5th of May, and its citizens get together to commemorate the Mexican Army’s victory. The Battle of Puebla has been re-enacted each year since the 1930s, at the Peñon de los Baños.

Mole Poblano is the representative dish for this festival

Many people in the United States celebrate Cinco de Mayo by eating Mexican food such as tacos and burritos, and slurping down copious quantities of tequila. In Mexico though, the representative dish of Cinco de Mayo is Mole Poblano. Mole Poblano is a rich, substantial sauce thickened with bread and chocolate. Originally conceived as a last-minute dish frantically prepared in time for the Archbishop’s visit, Mole Poblano is today known worldwide as a symbol of Mexico, and is consumed by Mexicans all over the world as a festive dish.

Cinco de Mayo is usually celebrated with a military parade

While Cinco de Mayo is associated with fun and festivities in the United States, it is a more formal occasion in Mexico. The kind of drunken shenanigans that accompany Cinco de Mayo in the USA are rarely seen in Mexico on this day. Rather, a commemorative military parade is held in the city of Puebla, involving Air Force flyovers and re-enactments of the battle. In Mexico, Cinco de Mayo is treated as a Mexican holiday celebrating a Mexican victory, and not a Hispanic/Latino festival as it is so often regarded in the United States.

Tips For Finding Affordable Housing In Major US Cities

Posted on December-2017 by Victoria D.